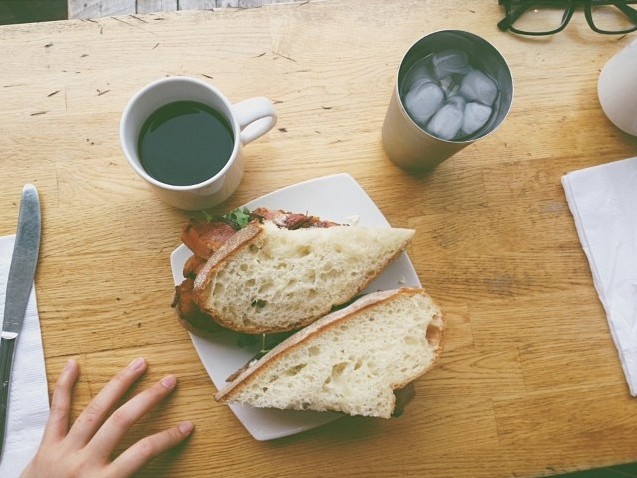 Talk about comfort food. Mmmm, Stockyards. The Stockyards: Smokehouse and Larder was the first restaurant I went to as an official Torontonian.

My partner Geoff, myself, and our cat Kinglsey were exhausted from our day of moving and we needed a break from our cluttered apartment. A friend of ours, who frequents Toronto quite a bit, recommended we check out Stockyards. He told us they’re famous for their chicken and waffles, so of course, we had to give it a try!

We ended up ordering a mountainous plate of golden, perfectly fried, perfectly seasoned chicken atop fluffy Belgian waffles. And because we like to share, we also ordered The Classic burger. Wow. I knew the chicken and waffles would probably be amazing, but I was overjoyed at the first bite of the burger. It was juicy and nicely cooked. There’s nothing worse than an overdone burger.

Chicken and waffles: comfort food at its best.

We’ve also tried their Saturday brunch menu and it does not disappoint. You can really tell the quality of a restaurant by the way they prepare their simplest menu items. I tried their biscuits with a side of jam and butter (which is accented with silvers of citrus), and Great Caesar’s Ghost! The softness of the warm biscuit with the melting butter and jam combination was heavenly. My body was a tingle!

I’ve also tried their Bat sandwich which has bacon, arugula, and a fried green tomato (top photo). I’ve never had fried green tomatoes before, and I realized I had been missing out this whole time! Try it with a homemade ice tea infused with ginger or black cherry soda (which is my go-to drink whenever I’m there, which I now realize, is a lot, a whole lot).

Our first meal as Torontonians: We were too busy eating the food so I only had a chance to take a photo of this black cherry soda.

Word of advice: Make sure you check out their menu or call in advance; sometimes certain menu items are available during specific days and/or times.

If you’re going for brunch on a Saturday, I would recommend getting there before 10:30 am. Stockyards has a crowd of brunch loyalists. You could perhaps opt for take-out, but I love dining in, sitting by the front window and people-watching.

Also, the portions are sizeable so it’s nice to go with a friend if you need help finishing a plate. But let’s face it, left-over fried chicken at two in the morning is just sinfully good.

2 thoughts on “You can’t go wrong with fried goodness”