Pizza, pizza, pizza. I’ll let you in on a little secret: I eat pizza at least once a week. My name is Nok and I’m addicted to pizza. It’s been one week since my last slice of ooey-gooey goodness. And I’m not picky: fast-food pizza, gourmet pizza, homemade pizza, I don’t discriminate.

So when a friend told me about a little pizza joint on Ossington that won third best pizza in the world, you know I had to get out my lactase pills and head over immediately.

The first pizza I ordered from Pizzeria Libretto was the duck confit pizza with bosc pear and mozzarella. I know, I like to get freaky with my toppings. But this non-traditional pizza was nothing short of traditionally-made culinary bliss. The pizza is baked for 90 seconds in a 900-degree wood-burning oven, which gives it their signature charred crust and blistered mozzarella.

I’ve tried half  of pizzas on the menu: duck confit, homemade sausage, grilled eggplant, Ontario prosciutto and arugula, cremini mushroom, and the margherita D.O.P. By far, the best pizza I’ve tried is the most traditional pizza on the menu. The margherita D.O.P. is beautifully topped with tomato, basil, and mozzarella. It’s understated and delicious. Sometimes the simplest meals are the best meals. But don’t let its simplicity fool you; it’s packed with flavour! 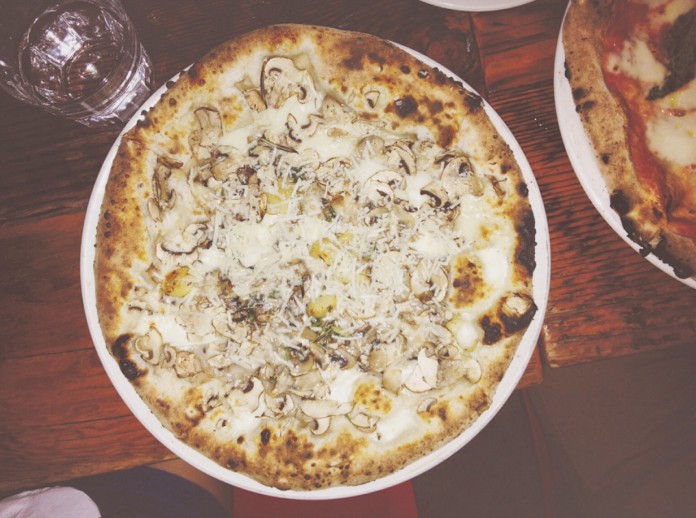 Behold! The cremini mushroom pizza. How did they know mushrooms are my favourite fungus?

Note: If you’re heading to Pizzeria Libretto for an evening meal, you’ll probably have to wait a bit, anywhere from 15 minutes to half an hour. But it’s worth it. In the past, I went across the street to a bar called The Painted Lady and had a pint as I waited for a text summons. I’ve also had a drink at the restaurant next to them called Fishbar. If you go for lunch, the wait will be substantially less. I went for their lunch prixe fixe, which is available from Monday to Friday, and you’ll only have to shell out $15. The last time I was there, I ordered the caprese salad, the margherita D.O.P. (my favourite one!), and both the biscotti and gelato (because I’m a dessert-monster).

7 thoughts on “Ain’t no party like a pizza party”