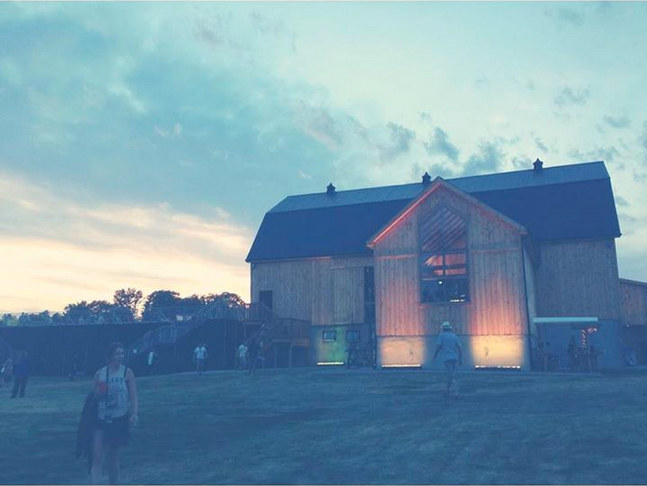 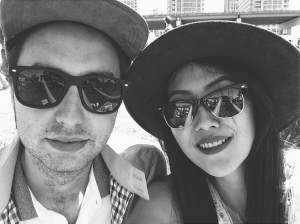 Someone saw my outfit and said ‘Groovy.’ That’s exactly what I was going for. Yes!

But I don’t want to pretend. I want summer to be for always.

All the music festivals, the life abounding in the streets, drinks in the park with long-lost friends, and nights on the patio; these are the things I look forward to when I’m in my fall mode of introspection and my winter mode of hibernation.

The sun is this elixir and the wind — a temporary reprieve from the heat. Everything is a bit more alive and troubles seem like a thing of the past. Or something relegated to some time in the future, some place far off.

During these summer months, I took advantage of my seasonally based energy and the beautiful weather. It was my first time going to Field Trip, a music festival sponsored by Arts & Crafts (an influential independent Canadian record label). Del La Soul was amazing! Girl loves to dance! Girl = me. I would definitely go again next year. During the last weekend of July, I was invited to go to the first ever WayHome Music & Arts Festival. My partner’s band Teen Violence played during the second afternoon of the festival. I was so proud of them! They played like old pros, but I admit, I am biased.

Being part of the Teen Violence crew meant I was given some sweet perks — including, but not limited to, the privilege of saying “I’m with the band” and also fulfilling the essence of scenes from Almost Famous. The VIP experience made it a lot more pleasant than my past festival experiences (I’m looking at you Coachella and general admission).

The now beloved artist compound. May you live forever in my memory.

On the day Teen Violence played, we were able to hang out in the artist compound which could only be described as a haven — almost a fantasy mirage in the sweltering desert heat. The complimentary food and drink were much appreciated and the staff were downright pleasant.

I’m happy it was such a success. They’ve already announced the dates for next year, which are July 22-24. It was fun to listen to well-established bands playing the same festival as lesser-known acts. Kendrick Lamar was crazy good. Once again, girl loves to dance. Alvvays was top-notch, and I would’ve danced more to Future Islands if I wasn’t asleep on my feet. Also, the surprise performance from Broken Social Scene was awesome!

Let’s all pretend that summer will never end. From this day forth, everyday will be filled with iced coffees, live music, and the belief that it all means something.

But maybe the last part of the symphony was the music she loved the best — glad and like the greatest people in the world running and springing up in a hard, free way. Wonderful music like this was the worst hurt there could be. The whole world was this symphony, and there was not enough of her to listen.
– The Heart Is a Lonely Hunter, Carson McCullers

I can still recall the feeling that came over me when my great-uncle Harper first placed the record needle onto a spinning 45. It happened right away. I felt that everything deep within my body was rising to the surface, that my skin was growing thin, that I would come apart. If this sounds painful, it wasn’t. It was what love did to my body, which was to transform it. I would come apart like a fireworks display, a burst of light that would grow larger and glow, and make the person below me say, “Ah!”
– Bitter in the Mouth, Monique Truong

I have always had difficulty listening to the frenzied sound of many instruments together. In Charles Town, on occasion, I had heard flutes, oboes, horns, and violins all rise together, but they always seemed like voices at war. Here, though, I could befriend the cellist, fall into his music, heed the melodic urgency, and be touched by the way it dipped low like the voices of village elders and skimmed high like singing children. Adonis Thomas’s cello whispered to my soul. Do not lose hope, it said. You too can make something beautiful, but first you must be free.
– The Book of Negroes, Lawrence Hill

My mother began to hum along, her body began to sway. The men in the living room remained silent, as though they were being reprimanded. Elf played louder, then quieter, then louder again. The birds stopped singing and the flies in the kitchen stopped slamming up against the windows. The air was still. She was the centre of the spinning world. This was the moment Elf took control of her life. It was her debut as an adult woman and, although we didn’t know it at the time, her debut also as a world-class pianist. I like to think that in that moment it became clear to the men in the living room that she wouldn’t be able to stay, not after the expression of so much passion and tumult, and furthermore that to hold her there she would have to be burned at the stake or buried alive. It was the moment Elf left us. And it was the moment my father lost everything all at once: approval from the elders, his authority as head of the household, and his daughter, who was now free and therefore dangerous.
– All My Puny Sorrows, Miriam Toews